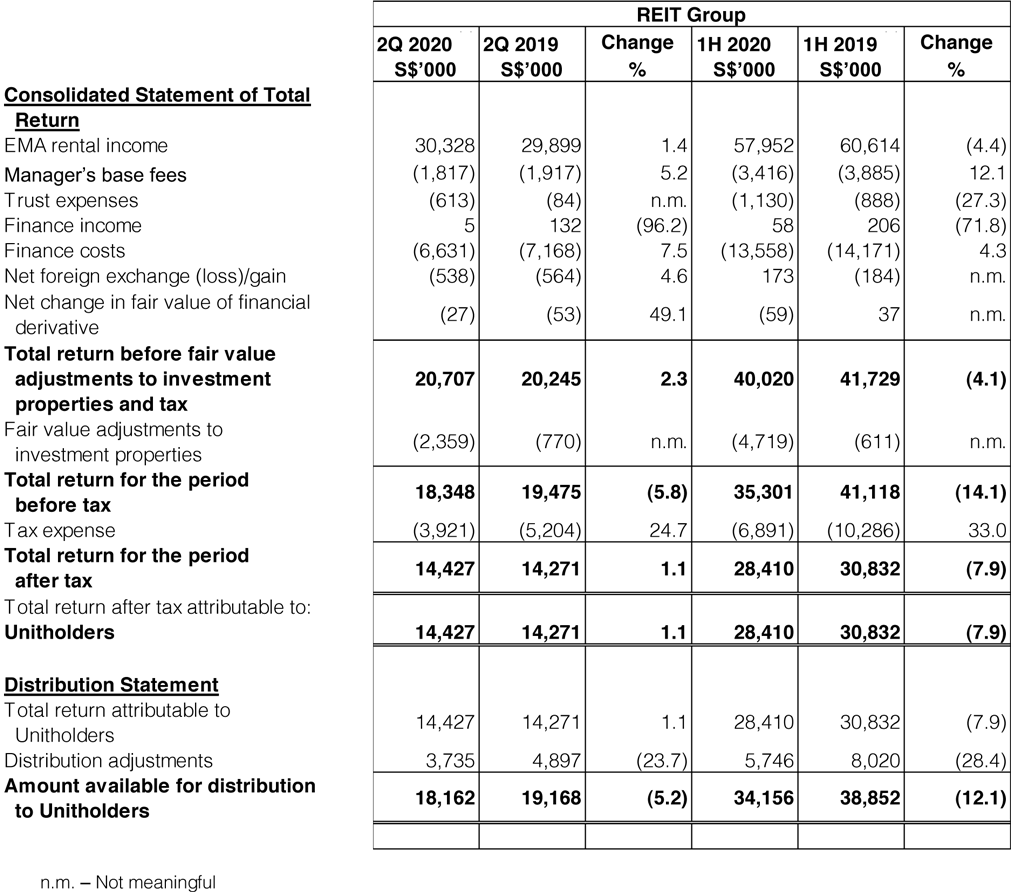 The amount available for distribution to Unitholders for 2Q 2020 was S$18.2 million, 5.2% lower compared to S$19.2 million for 2Q 2019. The decrease was mainly attributable to lower sales, one-off reversal of trust expenses in 2Q 2019, partially offset by lower finance costs and lower tax expense.

Tax expense for 2Q 2020 was lower by S$1.3 million or 24.7% as compared to 2Q 2019 mainly attributable to lower taxable property profits due to a slowdown of retail sales amid the COVID-19 pandemic.

China is the first major economy to recover from the coronavirus pandemic. Its Gross Domestic Product ("GDP") grew 3.2% in the second quarter of 2020 ("2Q 2020") on a Year-on-Year ("YoY") basis, and stood at RMB 25,011 billion¹ in absolute terms for 2Q 2020. Total retail sales of consumer goods for the second quarter were RMB 3,352.6 billion, a decrease of 1.8%² YoY compared to a severe drop of 20.7% YoY in the first quarter. These figures demonstrated a quick rebound of retail consumption that has continued from the last quarter, after the lifting of the lock down.

The data suggest that China will probably be the first economy to recover and achieve positive economic growth, with the United States, the European Union, as well as Japan still struggling to reopen their economies. Fitch Ratings has also affirmed China’s long-term foreign-currency issue default rating at ‘A+’ with a stable outlook, supported by China’s robust external finances and track record of robust macro-economic performance.

In response to the more volatile international environment, China is working to reduce its dependence on exports and promote demand domestically to drive economic growth. A new strategy, officially called “dual circulation”, will pivot away from export-led growth in favour of developing its domestic market. This is positive for Sasseur outlets as our main customers are resident Chinese middle-class that form the bulk of the important consumers in China.

There were no new retail projects or outlets in Chongqing in 2Q 2020, leaving the total retail supply at around 5.9 million sqm. The competition among the many Chongqing’s retail businesses will intensify, with increased pressure for differentiation in a crowded market.

For the rest of 2020, the retail sector will continue to be impacted by the fallout of COVID-19 pandemic. The retail sector is expected to accelerate store and product differentiation to meet fiercer market competition. The ongoing asset enhancement initiatives ("AEI") undertaken at Sasseur's Chongqing Outlet is timely as we seek to re-position and differentiate the Chongqing Outlets with major aesthetic enhancement and re-configuration works to the retail layout.

For 2Q 2020, no new outlet malls were opened in Hefei and Kunming. Sales had been improving with a myriad of promotional activities to attract shoppers.

The global luxury goods business is pinning its hope on a swift recovery of the Chinese market, which is the largest luxury goods market in the world, and a key driver of growth. As full resumption of international flights is unlikely in the foreseeable future and Chinese overseas travel growth had already started to slowdown in the second half of 2019. This has affected spending on luxury goods outside China, accounting for 70% of total luxury consumption by Chinese middle-class consumers³. The price gap for luxury goods between domestic and overseas markets has continued to shrink as luxury brands normalise their pricing structures. The central government has also recently released a series of policies to encourage such consumption within China, such as through the promotion of duty-free stores. These factors have provided an impetus to the re-shoring of overseas luxury spending and contributed to the strong rebound in China’s luxury sales. This has also attracted more luxury brands to extend their presence in China.

Sasseur REIT’s outlets are well-positioned to benefit from all these positive trends notwithstanding the disruption of business by COVID-19.

"The information behind this electronic gatepost is only being made available to residents of Singapore.

By clicking on the "I agree" button below, you will have acknowledged the foregoing restrictions and represented that you are resident in Singapore and are not accessing this website from jurisdictions outside of Singapore, including the United States."